The official statistics for the 2020 French harvest are starting to come through, but to get a real hands-on insight into what we can expect here are the views and insights from winemakers and producers in key regions across the country.

French winemakers are anticipating a significant recovery in their yields for the 2020 vintage, with increases in all the main growing areas, following a record-early start to grape harvests in regions including Burgundy which had its earliest harvest in more than six centuries, and Champagne where grape picking started in the middle of August, the earliest on record.

This is backed up by the Agriculture Ministry, which has forecast that this year’s vintage will be larger than 2019, up by over 6% to reach 45 million hectolitres, and signalling a return to five-year average levels, after spring frost and summer drought damaged last year’s grape harvest. “Harvests started in August in almost all the regions, and show a remarkable advance compared to 2019,” the ministry said. This is explained by a spring that was the second warmest in 120 years and a relatively warm winter.”

But how have individual producers fared? Here is a round up of reports from a variety of independent winemakers across the key French wine growing regions as to how the 2020 vintage has played out so far and the challenges they have faced.

In Burgundy, grape harvests started on August 12, the earliest date in records that stretch all the way back to the 14th century, according to local wine board spokeswoman Mathilde Paturaud.

The volume of wines with a protected designation of origin is forecast to increase by 2.4%, a slower pace than total wine output as some growing regions set production limits in the face of the Coronavirus pandemic.

“Some regional inter-professional organisations decided to set the level of their designation wines lower than 2019, because of an economic market eroded by the Covid-19 crisis,” added the ministry.

Output in the Burgundy-Beaujolais region, meanwhile, was predicted to rise 12% to 2.13 million hectoliters with drought and heat reducing the volume of Pinot Noir grapes in Burgundy according to the Agriculture Ministry. 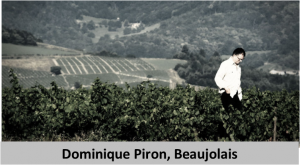 Heading south to Beaujolais and Julien Revillon at Domaines Dominique Piron in Morgon reported the harvest being very early this year, kicking off at the end of August.

“Good quality fruit appeared before the crush, and the very hot and dry summer produced berries with highly concentrated sugar, but also good acidity,” he commented. “The 2020 vintage is similar to 2009, 2016 or even 2003, that is to say perfectly well balanced with very low yields.”

In the Loire Valley rains in August boosted volumes, which are forecast to leap by 44% to 3.15 million hectoliters, while harvesting started at the end of August, almost a month earlier than in 2019.

This was certainly the case for Martine et Pascal Guilbaud who reported that it finished its harvest on September 10, the date they only started the grape picking in 2019.   The brothers will remember 2020 as the year of dried grapes similar to sultanas due to excessive heat, alongside top quality golden coloured fruit.

“The skin of the berries seemed to be quite thick, their pulp was limited and the amount of juice was less than expected, although the yield was satisfying as around average,” said Pascal. “The profile of the wines is similar to 2016, even if each vintage remains different. The juice was straightforward, frank and precise, so pleasant to work with, the outlook for the vintage is positive.” 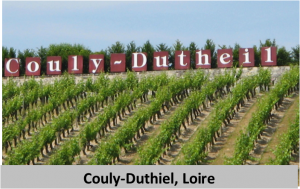 One estate to buck the general trend of an early harvest seen in much of the region was Couly-Dutheil in Chinon, where the vintage didn’t get underway until September 18, almost 15 days behind schedule following the stress caused by drought and heavy rainfall.

However, Phillippe Verrier, who manages the family estate, said he was “highly confident” of this year’s vintage. “The white grapes boasted high degrees with nice acidity, so we had to rapidly transfer them to the cellar,” he said, while the rosés, which were picked from September 25, saw “pleasant increases in temperature during the daytime brought about nice fruity flavours”.   The sugar of the red grapes rose well, but phenolic maturity came about at the end of September, he added. Before this date the grapes were still displaying some bitterness and a lot of acidity.   “This vintage is along the lines of 2018, but with a bit less sugar and alcohol, all the while expressing extra vivacity,” added Verrier. “My number one objective is that of maintaining Chinon’s fruit, so as to ensure its expression from the very start, and then of extending its aromatic range through the use of ageing. The diversity of Chinon’s terroirs allows us to propose a complex variety of wines.”

For the Bordeaux region, harvesting of white wine grapes was 15 days ahead of last year, with wine production there forecast to rise 1% to 5.37 million hectolitres.   At Domaines Fabre, in the Haut-Médoc, Margaux, the vintage kicked off on September 16 with the picking of the Merlot grapes in the estates in Haut-Medoc and Margaux, followed by the old parcels in Haut-Medoc on the September 17 and 18 finishing the following week. This was followed by the Cabernets and the Petit Verdots, which displayed good phenolic maturity, according to Jean-Hubert Fabre who said that heavy rainfall on the night of August 12-13 that helped to fully ripen the fruit.

“The grapes tasted good, the tannins and the pips were very ripe and the degrees were lower than we feared - the Merlots contained 13.5 - 14 % alcohol - ” he said.

Over at Vignobles Joseph Janouiex in Saint-Emilion, Pomerol and Côtes de Castillon, proprietor Jean-François Janouiex said he was expecting “a promising vintage with concentration and plenty of body.

“The vines did not suffer from drought thanks to groundwater at a depth of three metres.”   Vineyard Manager Didier Beillon had to juggle the harvest of the parcel selections, which lasted about 15 days and only took place in the morning to avoid the heat, thereby providing optimum picking conditions: the crush began in September with the Merlots for the production of organic wines, followed by the grapes of Pomerol, then the Cru Classé wines before returning to Haut-Sarpe to harvest the Cabernet Franc.

“Well ripened, crunchy and pleasant, fleshy grapes with thick skins confirmed that this is going to be a very nice vintage,” said Janouiex. “The wines are displaying good balance.”   Jean Paul Durup of Domaine Durup in Chablis describes the 2020 vintage as “rich and full bodied”, with early flowering, after a mild winter without springtime frost. He is expecting an excellent 2020 vintage, with plenty of freshness and mineral notes, despite slower growth due to cooler weather in July and buds dried by the heatwave at the beginning of August.

Meanwhile at Domaine Roux in Saint-Aubin in 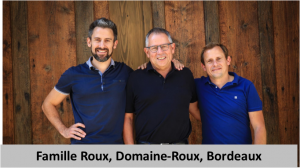 the Côte d’Or, Sébastien Roux described the 2020 vintage as being characterised by “nice, top quality grapes. Early picking, he said, was usually “exceptional” in Burgundy, but this year the harvest started on August 20 and continued through to September 15.

Matthieu Roux explained the difficulty they faced in deciding on the date to start the harvest, saying he was relieved that the vintage was so plentiful despite the drought. And the first week was complicated,

“The vines that had suffered from water stress because the drought delivered a fairly low yield. But I was reassured by the good whites and the nice run-off juice obtained during the second week, as well as the quality of the Pinot Noirs that delivered beautiful extractions.   As a result, the rare occurrence of picking Pinot Noir vines before the Chardonnay grapes largely took place during the second week.

Martin Orliac at Domaine de L’Hortus in Pic Saint Loup reported a “rich, fruity and refined vintage… with huge differences from one vineyard to the next.” He said that there was a “significant disparity” between the harvest with few grapes in the vineyards hit by frost, and the bumper crop of those parcels spared the worst of the harsh weather.

Orliac said that the harvest started very early on August 17, with the Muscat à petit grain, which had to be completed in a hurry to avoid heavy rainfall with the last plot of handpicked Mourvèdre on September 19.

“As it turns out, the yields are acceptable as it wasn’t too dry and rained quite a bit, despite our fears the first days with the whites and the Syrahs following the springtime frost,” he explained.   The harvest of the Grenache and Mourvèdre over the following fortnight was in line with normal, with perfectly well ripened grapes for all of the varieties.

“The Syrah wines with lower yields are going to be richer with better structure, whereas the more limited amount of Grenache has provided plenty of richness and nice fruit”. 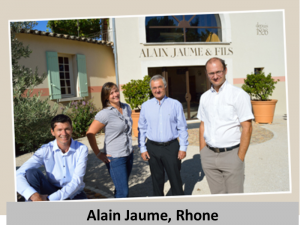 Optimum rainfall at the end of August after a fairly dry spell was welcomed by Alain Jaume in Châteauneuf-du-Pape in the Rhône Valley, who added that “prospects look favourable for 2020”.

Christophe Jaume noted that the Roussanne grapes developed amber and slightly red colours as they ripened and these were used to make the Fontaine wine brand, created back in 1990, according to Burgundy-style winemaking procedures.

“It was necessary to pay more attention to some plots with red grape varieties because of fairly early frost, and to undertake green harvesting, as is the case each year,” he said. Picked in mid-September, the ripening of the Syrahs benefited from light rainfall that boosted the berries, hence the nice green leaves and development of the polyphenols.

Down in Provence, 2020 has been marked by a climate extremely well suited to grape production, according to the estate manager of La Londe-les-Maures-based Figuiere estate, Francois Combard. Pleased to have avoided the major spell of frost along the coastline at the end of March and to have benefited instead from the wet springtime weather and fairly mild summer temperatures, he said that the fruit ripened gradually – “the sign of an excellent vintage.” Tastings of the fermenting wine already indicated average degrees, contrary to extremely hot years – and juice with “plenty of finesse and very beautiful colours.”

In Champagne, production of designated-origin wine is forecast to nosedive by over a fifth (21%) to 1.72 million hectoliters, even as total volumes climb, according to the government outlook. In response to falling sales, the region’s wine body slashed the maximum amount of grapes that can be used to produce Champagne-labeled sparkling wine by 22% to 8,000 kilograms per hectare this year. 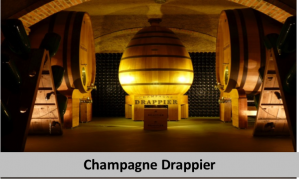 Michel Drappier at Champagne Drappier says that following a very sunny and warm season he knew the harvest was going to be ahead of schedule, though not to the extent it was, with the first grapes, Fromenteau, being picked on August 21, a full month earlier than the date the harvest kicked off 30 years ago.

“The harvested grapes are perfectly healthy, well ripened and filled with aromatic precursors,” said Drappier, adding that the plots benefit from various exposures, enabling the winery to play around with various picking dates and to harvest fully ripened fruit.   “Facing both east and north and situated at an altitude, our vineyard has assets in the present context of global warming,” said Drappier. “The Pinots, whether they be Noir, Blanc or Meunier are vibrant, whereas the Chardonnay, that ripened later this year, will provide all of the freshness and elegance that one expects from a great Champagne.”