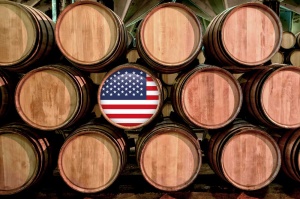 ited States is a major wine producing nation and importer.

In 2014, the total consumption of wine ranked 1st globally, reaching a record high of 3,069 million litres. Consumption per capita in the US reached 9.6 liters per annum, a 10 year high.

Chardonnay continued to account for the largest percentage, representing 17.3% and 16.4% of the total crush volume. Whereas a general reduction in crush volume is witnessed in all major varieties, except riesling.

The price index of all major US vatieties plunged after the 2013 harvest, which is expected given their record high supply available to the market.

The bulk wine export from the United States is relatively stable between 2013 and 2014. In contrast, the bulk wine import into US dropped both in price and volume simultaneously.

The market data displayed has been assembled from in-market surveys, various published reports and with the assistance of industry experienced confidantes. No trading decision should be based solely on the information provided.

You should discuss your specific requirements with your VINEX Regional Manager.