It is an illustration of how quickly the Chinese wine market has developed that is now in a position to host not one but two major bulk wine shows this year. Later in the year the International Bulk Wine Show will be opening its doors in Shanghai between November 5-6 for its inaugural show in the country.

But before then the World Bulk Wine Exhibition, that over the last decade has become the centre piece of the global bulk wine market with its trade show in Amsterdam in November, is embarking on what is also going to be its first show in China.

It clearly shows how important China, and Asia as a whole, is now to the global wine industry. Particularly as new trade deals open the region up even more, like the recent breakthrough deals that China has enjoyed with Australia and China, and most recently the EU and Japan.

So why is WBWE choosing 2019 as the year it makes its move into China? VINEX caught up with Otilia Romero de Condés, CEO of the WBWE (Amsterdam and Yantai) shows, to assess what we can expect from this first show.

Why are you holding the exhibition, first in China and why in the city of Yantai and not Shanghai or Beijing?

China is already the fifth biggest wine importer worldwide and has the potential to become the top global bulk wine operator.

Why Yantai? Well, because it is known as China’s ‘City of Wine’ and the country’s most important port of entry for bulk wine. More than the 80% of the bulk wine that enters China does so via the port of Yantai, according to Chinese government figures.

It therefore means it is the most important city in China for the bulk wine sector and the ideal venue for our first exhibition there.

How many exhibitors do you currently have lined up, and where are they from?

We have more re than 140 wineries from 20 different countries. This includes a wide range of companies from Chile, Spain, Italy, France and South Africa.

We also have state delegations with wineries from Argentina and Moldavia, and producers from Australia, Portugal, Ukraine, Georgia, Macedonia, Romania, Uruguay, the United Kingdom, Brazil, Germany, Greece, and the US.

Then there will also be exhibitors from China itself who are keen to take the most of the first edition of the World Bulk Wine Exhibition Asia. 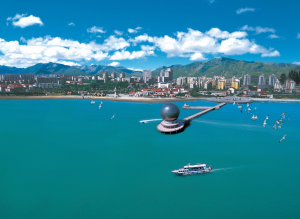 What about visitors? Any indication of the size of numbers and interest so far?

Over the last five years the WBWE has had a continuous communication strategy in China. We feature on all the specialised Chinese wine platforms and are seen as one of the Top 10 wine exhibitions in the world. So thanks to that the awareness of the WBWE Asia edition is very high in China. Our local Chinese representatives have been travelling across the country to all the most important purchasing regions in China to let them know what we are doing, and invite them to the exhibition. The feedback is overall very positive.

Why should visitors attend the event?

The majority of wine fairs are for bottled wines or wine brands, that are already in the market, and been established by a producer or a distributor. WBWE Asia offers visitors the chance to create own private labels, as well as own brands or OEM wines. Up to now most buyers have only really purchased their wines from established suppliers in the market, and not really had the chance to develop an individual brand that is tailored to the demands of their market and clients. This is going to be the first bulk wine exhibition in this part of the world, so the fact the World Bulk Wine Exhibition is coming to China, means local expectations are very high.

Any interesting masterclasses and events taking place during the show?

As well as all the producers, importers and brokers coming between May 30 to 31 to look to do business, this trade fair will also be a place for debate, technical conferences and first-class tasting sessions. We have a strong line up of prominent wine professionals such as Li Demei, Marine Ma, Cruz Liljegren, Natalie Wang, Dan Traucki and many others.

Some of the highlights of the conference programme include:

* Things you can learn from my mistakes as a bulk wine broker: Cruz Liljegren, CEO of Premium Wine Broker.

* Is there an interest in organic wine in China? Chen Qingchang, technical director of WEILONG WINE Co. Ltd

* Australian wines and varieties with the most sucdess in China: Dan Traucki MWCC, freelance wine journalist and export consultant.

We will also be hosting a masterclass from China’s leading enologist Li Demei, who is very much responsible for helping to improve the quality of Chinese wines on the global stage with his various consulting work, particularly in China’s northwestern Ningxia and Xinjiang provinces. He was voted as one of the 10 most influential wine consultants in the world by Drinks Business. Li is the equivalent of Michel Rolland in China.

But there is a full programme of other conferences, roundtables, masterclasses and technical tastings that are taking place at WBWE Asia.

How is the overall Chinese bulk wine market and what opportunities do you see in the future?

The Chinese bulk wine market is performing very positively. There is also a lot of potential and we are only really at the beginning of its development. It cannot be estimated. Compared to the rest of the world its growth figures are high. While there might have been some slowdowns due to political decisions or global economical situations, the wide majority of the Chines population is still to discover wine.

The most important countries of origin for bulk wine into China is Australia, followed by Chile and Spain. The market is changing very quickly and only in the first three months of 2019 did we see Australia surpass France’s import figures for the first time. This will not be for the whole year, but shows that China is a dynamic market. In the near and long term future China will continue to grow and more wine drinkers will evolve. Also China, as a wine producing country, will enter the worldwide business and change the existing landscape.