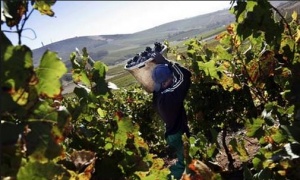 The South African wine industry is reeling from the impact of Covid-19 which has seen a two month ban on alcohol sales along with a moratorium on exports.

About 80 wineries and 350 producers have already gone to the wall, with 18,000 workers losing their jobs, according to industry body Vinpro, which represents around 2,500 South Africa wine producers, cellars and other stakeholders.

The industry lost R200m per week in exports during the lockdown period, and R300m in domestic sales, bringing total losses to around R3bn.   Producer Gerard Holden of Holden Manz Wine Estate said his company had lost the best part of R5m in the past two months, and had been forced to lay off three quarters of its workers.   “The bills keep coming in and we see no support or relief from govenremtn whatsoever,” Holden told Ground Up.

Meanwhile the president of the Black Association of the Wine and Spirits Industry (BAWSI) and chief negotiator for the Rural Agriculture and Allied Workers Union (RAAWU) Nosey Pieterse was infuriated by the job losses, pointing out that farm workers were categorised by government as essential employees.   The Government had given a last minute reprieve to the wine industry to allow for the harvesting and storage activities essential to prevent the wastage of grapes, and therefore should not have been affected by the lockdown he said.

Pieterse claimed that “unscrupulous farmers” were using the lockdown as an opportunity to terminate workers’ contracts, adding that those affected have not had the chance to contest decisions by farmers to lay them off.   Normally employees with a grievance would be able to approach the Commission for Conciliation, Mediation and Arbitration (CCMA) for help but it is currently operating on a skeleton staff and the trade unions and NGOs are classified as non-essential, leaving employees vulnerable.

The alcohol ban could also result in a shortage of storage at the end of the year due to a backup of surplus stock, said Johan Morkel, manager of Aan De Doorns Wine Cellar, a cooperative of 26 farms outside Worcester who said that farmers are “pessimistic” about the ability of the wine industry to recover.

Numerous cellar owners and winemakers interviewed expressed concern over the future of the industry, and Vinpro claimed it will take many years to bounce back, adding there were indirect costs, such as international reputation loss and damage to industry relationships built up over years, which are incalculable.